NHS Staff Can Decide Where Disabled People Live, Even Against Their Choice

With the publishing of the Union of Physically Impaired Segregation (UPIAS) Policy Statement in 1974, the disabled people’s movement in the UK began (give or take). Allowing for the archaic terminology, I appreciate this line: “The Union’s ultimate goal is to develop a situation in which physically disabled persons have the ability to choose where and how they want to live.”

“Flights of steps,” “inadequate public and private transportation,” “unsuitable housing,” “rigid work routines in factories and offices,” and “a lack of up-to-date assistance and equipment” are also mentioned. It doesn’t sound all that strange, albeit there has been some major development.

Disabled individuals gradually gained the right to ride public transportation, to expect to be served in stores, and, most crucially, to reside in their neighbourhoods. That was our assumption, at least.

Many of the difficulties in exercising these rights are practical in nature. If your store has a step and you forgot that the Equality Act of 2010 requires you to install a ramp by now, my money will stay in my wallet. If every property in a neighbourhood has stairs, steps, and really tight doorways, I’m not going to relocate there.

It’s not always as simple as rebuilding or making a few minor changes. There are more serious causes and effects.

The Continuing Healthcare Choice & Equity Policy of Southampton Clinical Commissioning Group sparked outrage on the internet a few months ago. People could be moved from their homes to a residential facility without their agreement, according to Southampton CCG, for no other reason than to save money.

This would not have to be on the condition of minimising the impact on the person’s health or the facility’s location about the person’s family, friends, and sources of support, and it might violate current national and international Human Rights legislation.

Someone who has never met the individual in issue can sign a piece of paper and completely transform the way they live. They may read a synopsis of a person’s medical needs, calculate the cost, decide where they’re going, write a letter, arrange for a taxi, and call it a day. It didn’t matter whether the person was delighted to be moved or not, or whether their health needs were adequately met in their current residence.

However, Southampton CCG’s media statement had a shocked tone to it, implying that other places might have the same idea. DPAC assured us that they had proof that a few other CCGs had adopted similar rules.

One of the most fundamental human rights, the right to live where and with whom one chooses, has been battled for since 1974 and is still unfulfilled.

True, the Human Rights Act might theoretically be used to protect persons, but there has yet to be a court case of this nature, therefore the legitimacy of this scenario is now in question.

True, I hear you say, the NHS is under financial strain and something has to give, but I believe that excellent support costs less in the long run than lousy assistance, and I’d gladly data-wrestle anyone who disagrees. I’d also like to know how much the impact of the Independent Living Fund closure and the stress on the Adult Social Care budget on Continuing Healthcare was discussed and considered before such decisions were made.

If anyone has been directly affected by this issue, please contact editor@disabilityunited.co.uk 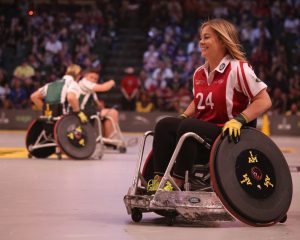 Disability United is the UK’s disability equality news website. We offer practical information and emotional assistance when it’s most needed, and we work tirelessly to make the world a better place.